We need to talk about The Walking Dead…

When on form, it’s well acted, beautifully shot, thought-provoking, and emotional. It’s capable of providing commentary on the human condition in smart and terrifying ways. For a show set in a zombie-filled, post-apocalyptic wasteland, it has (largely) avoided gimmickry, instead aiming for something smarter, and founded first and foremost in character, rather than endless walker slaying. That’s been the beauty of it since day one; the focus has never been solely on the ever-peckish walkers of the series’ title. Rather, as Rick put it himself… 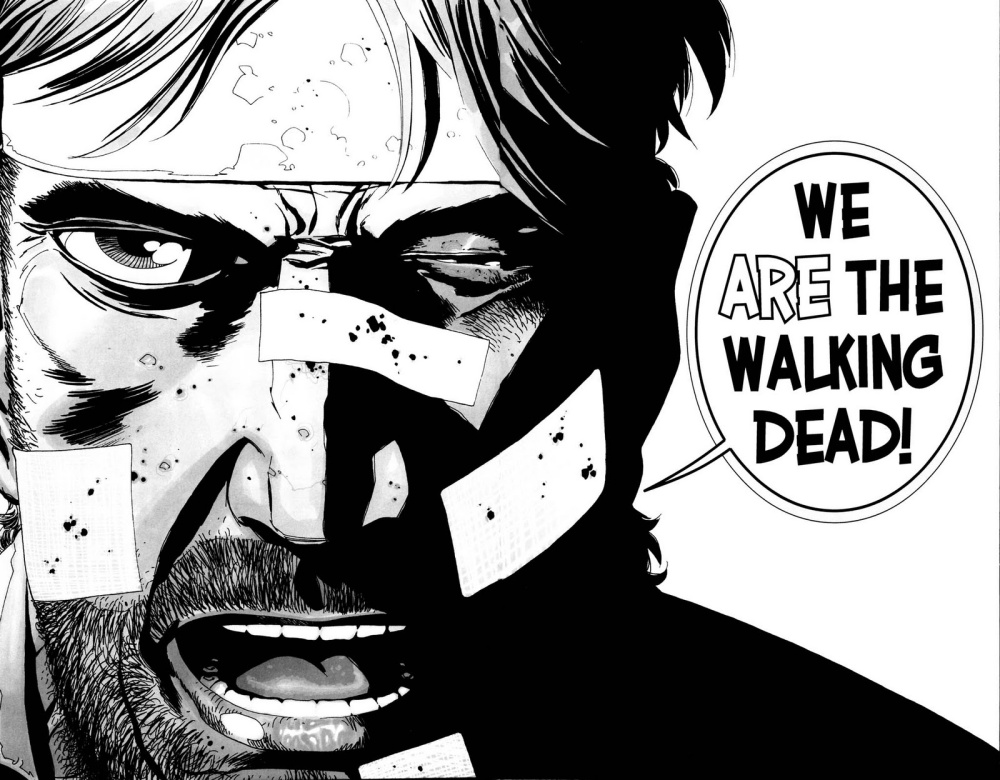 The “we” here referring to the characters themselves, of course, but also to society at large. Sure, there have been plenty of undead attacks thrown in for good measure, but The Walking Dead is always at its finest when it has something interesting to say and uses strong character development to do so effectively. And though said characters may face death at any moment, the best of them are worth investing in, with the most compelling of their trials acting as a black mirror, reflecting what our world might be if it were to crumble around us.

Or, at least, that used to be the case. Somewhere along the way, however, the ideas well has started to run dry. It’s not getting bad, per se, just… mediocre. With repetition in the storytelling, the tropes that it has come to lean on have become increasingly apparent. What was once bold has become stagnant.

Personally, I’ve gone from “die hard” fan to a passive follower in the space of months. I’ve read the comics, I’ve played the Telltale games, I attended the premiere of Fear The Walking Dead, and would never have dreamt of waiting for any stretch at all to watch a new episode until recently. After Seasons Five and Six, I scrambled to put together my thoughts on the latest batch of episodes. This time around though, not so much. It’s been a gradual decline in quality, but nowadays it’s a decline which feels more obvious than ever. I’m clearly not the only one feeling this way either. Season Seven’s viewership was lower than the previous three years. Even if it’s not exactly struggling, with an average of 11+ million viewers each week, it’s a drop nonetheless.

As they say though, things can only get better. It’s just going to have to make a few changes to complete its much-needed course correct…

All killer, no filler:

There have been 99 episodes to date. Whereas the first season had just six entries, the later years have bloated to 16 episodes. Yet, the increased numbers have done nothing to improve the quality. Quite the opposite, in fact. The stories haven’t become more expansive, they’re simply now just padded out. Which might suggest that it’s time for ten episode seasons – if ten is a good enough number for Game of Thrones, it’s good enough for The Walking Dead. Less can be more. Do we really need the never ending shots of people wandering in silence? I think not. Get lean, get concise, and up the pace.

Stop with the rinse and repeat:

The gang finds a new safe haven. Some nasty chap rolls in and wipes a bunch of them out. Our heroes return the favour, and then move on to the next safe haven. Rinse, repeat. The arrival of Negan for Season Seven should have shaken up the status quo, but instead, it reinforced it, putting the show into the same pattern that saw it through The Governor’s (David Morrissey) shenanigans in Seasons Three and Four. Jeffrey Dean Morgan is a riot as the new baddy in town, Negan, yet although the plot only really moves forward when he’s present, it’s only ever into territory that has already been explored, by virtue of how he’s been introduced. Jon Bernthal’s Shane was a villain that surfaced from within the group to memorable effect. It doesn’t always have to be an external force butting heads with Rick and company.

Early on in the run of The Walking Dead comics, a character sustains an injury that permanently affects their psyche, how they operate in combat and makes them question how they will be able to survive the world. The show, on the other hand, seems to have grown reluctant to make such changes or bold choices of any kind for that matter. Negan arrived with a bang, taking out one main player, and another of less significance. Since then though, it’s all been played a bit safe. It’s time for the characters to be pulled out of their comfort zones, and for cages to be rattled. Kill a big player off and let someone else fill their void. Freshen things up. Only then can we start to see the characters forced into new challenges and tribulations.

Beyond the original lineup of misfits we were introduced to in Season One, how many have left a lasting impression? Some have shuffled to the fore; Seth Gilliam’s Gabriel, Austin Amelio’s Dwight, and Josh McDermitt’s Eugene, to name a few. But for every Gabriel, Dwight, and Eugene we’ve had a Spencer (Austin Nichols), a Gregory (Xander Berkeley) and a Jessie (Alexandra Breckenridge) – with the latter camp outweighing the former by a rising amount. With characters wiped out year on year, there is, naturally, a demand for new leads to be developed. But sometimes the series has a tendency to try and make characters run before they can walk.

Did Tara’s (Alanna Masterson) return really warrant a full episode featuring her, and only her? Would the sacrifice Sasha (Sonequa Martin-Green) made have had a greater impact if she been afforded more to do before the final stretch of Season Seven? There’s a balancing act, for sure, between taking the time to develop characters and pushing characters from the periphery to the forefront, and it’s one that the showrunners certainly could do with being more shrewd in trying to get right. They shouldn’t be afraid to be patient in allowing characters to grow into their skins. If Carol (Melissa McBride) had been offed in the opening season as a downtrodden housewife, she’d be long forgotten. If she went now, as a fearless, badass, leader, it would change the face of the show significantly.

What did you think of The Walking Dead Season Seven? What changes would you like for the show to make? Sound off in the comments below!