Community has returned, and it is awesome! Was it ever really in doubt?

*Community Season 6, Episodes 1 and 2 spoilers ahead*

After a long, turbulent year for Community fans, everyone’s favourite indestructible TV show is back, thanks to the heroes over at Yahoo. Of course it’s never been simple for Community, a show adored by critics and its passionate fan group, but spurned by the masses. 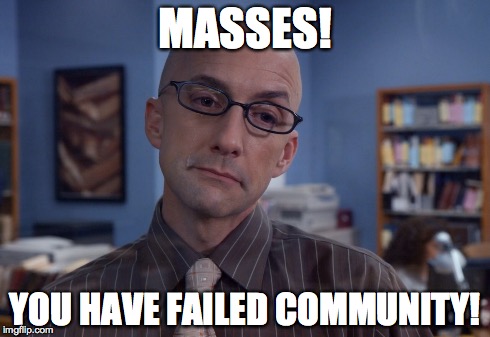 The post season 5 cancellation seemed likely to be the final nail in the coffin for Community, but at the 11th hour Yahoo, of all companies, swooped in and saved the day. And so here we are, with season 6 up, running, and available to stream on Yahoo. Miracles do happen folks! But there are a few concessions to be made. Following in the footsteps of Chevy Chase and Donald Glover, Yvette Nicole Brown has departed, meaning the Greendale Seven is down to four of its original members. As well as this, series regulars John Oliver and Jonathan Banks are nowhere to be seen either. But if Community has taught me anything, it’s that it is resilient in the face of change. Which brings me nicely to the first of my four big takeaways from the season six openers of Community:

With a number of the original and established characters leaving, Shirley and Troy shaped holes are left in the cast, which means the introduction of two new actors into the mix. Paget Brewster as Frankie, and Keith David as Elroy. And how do they fit in? Pretty well, I’m happy to report. Frankie gets the bigger role during the first two episodes, as a straight laced, no nonsense consultant brought in to save Greendale (again). She’s not the typical Community character (as Abed raises), but concerns over her being too straight forward are mostly allayed by her great chemistry and scenes with Abed (Danny Pudi). Though her character is almost the Anti-Abed, they work well together.

Elroy on the other hand gets a great introduction as the purveyor of shoddy virtual reality systems. Whilst the set up leads to some of the second episode’s best moments – “JESUS WEPT” – most of them come from the Dean, rather than Elroy himself. For the most part however he seems to have the potential to be an interesting addition to the group. His introduction also puts to bed Chang’s concerns that he and Abed might be forced to leave the group after Shirley and Troy’s exit – despite Jeff’s assurances to the contrary as the “leader of the white people”.

2) Community is off into the great outdoors:

If it seems as though the gang rarely venture into the great outdoors, or are rarely even seen outside around the grounds of the Greendale, it’s because they have only been shooting on sets for many moons now according to Dan Harmon. Two episodes in however and the gang have been to pastures new, meeting Britta’s delightful parents in the process (much to her disgust). Yes Greendale is a crucial part of the show, but it’s nice to see the study group getting out and about now and then, as the excursion to Britta’s family home shows.

Community seems to have literally endless amounts of ways to poke fun at itself, its setting, television and cinema, and it certainly does so in the opening two episodes. Be it meta discussions between Abed and newcomer Frankie, or observations from Chang on the show’s departures, it’s not afraid to tackle issues and concerns that the fans may have head on, and in a consistently funny manner to boot.

But the fun doesn’t end there, with two incredible montage sequences (including one of Abed and Jeff repeatedly saying “we’re sorry” in a variety of different ways), and some fantastic classes on offer at Greendale – From ‘Ladders’, to ‘VCR Repair’, to ‘When it is OK to shake a baby’.

4) The Butcher and The Baker:

Despite Shirley’s exit from the show, she did at least get a send off of sorts, in a bizarre, and hilarious final scene at the end of the first episode, where she has ‘spun-off’ with her own show, The Butcher and the Baker. Perhaps, just perhaps we might see some further cameos from past cast members, or even just cameos from past guest stars – Nathan Fillion has already popped in – will we see the return of Pierce’s hologram, or maybe even Troy? With the show six seasons in there is plenty of scope for callbacks, and that for me is something to look forward to.

So what did you think of Community’s return? Share your thoughts in the comments below!