Crimson Peak is upon us. Released this week, Guillermo del Toro’s Gothic Romance takes us to a beautifully creepy mansion, following in the footsteps Edith Cushing (Mia Wasikowska) to the home of her new love, Thomas Sharpe (Tom Hiddleston), and his sister Lucille Sharpe (Jessica Chastain)….a home which is host for ghostly apparitions, and where all is not as it seems. Beware!

To celebrate the film’s release, I’ve dug up from the crypt an early post from Flicks and Pieces past – Ranking the Movies of Guillermo del Toro – director of Crimson Peak. Full disclosure: I’m a BIG fan of del Toro’s work; often beautifully gothic, rich in colour, deep in its level of design, and full of imagination. The article takes an in depth look at his back catalogue of films, as well as a look at the man himself and what makes him tick. Take a look at the article below the break, and enjoy Crimson Peak! 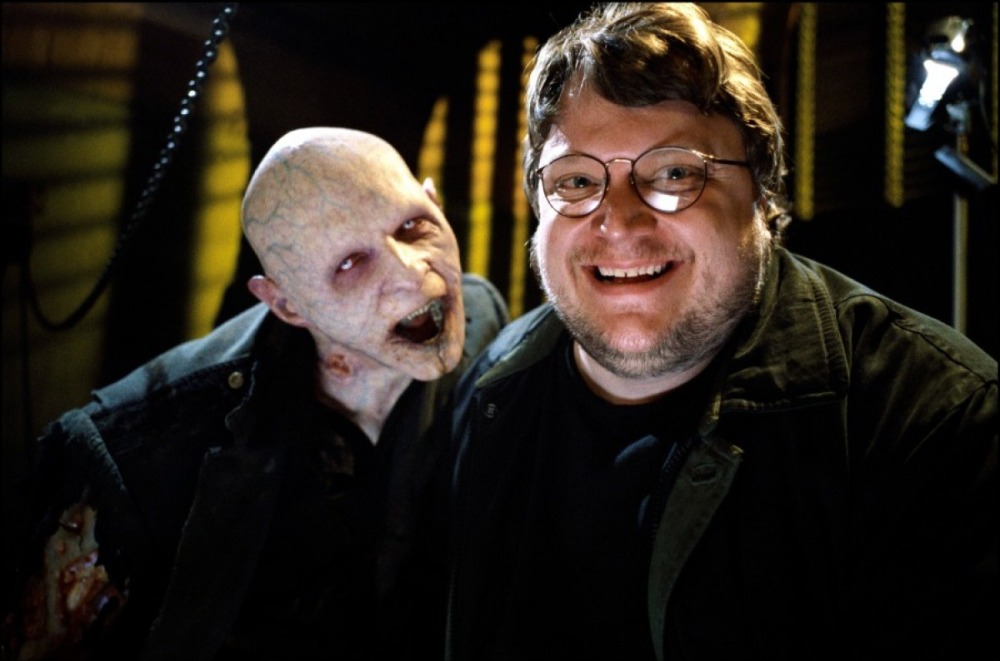 For Guillermo del Toro, it’s what lies beneath the bed, behind the curtain, or in the darkness that made him tick as a child, and inspires him creatively as a director. As a self-confessed lover of the macabre, del Toro surrounds himself with art, imagery, sculptures and collections of all that can feed his obsession with monsters and ghouls, using this to fuel his imagination.

His own personal collection of curiosities are housed within the walls of Bleak House, the ultimate collection of the macabre, where he can both work and take inspiration.

But in the dark and ghostly he also sees beauty, and this is reflected in his films, often stunningly shot and incredibly designed. Being an accomplished artist he sketches and creates his monsters on the page first in his notebooks, before they are brought to life in film predominantly using practical effects.

But these are not your garden variety monsters, ghouls and contraptions that del Toro creates. Leaning on his encyclopaedic knowledge of the history of horror he creates nods towards his favourite art, towards famous monsters and films which have provided him with his inspiration. His monsters serve a higher purpose than that of just to scare (though scare they certainly do), driving his stories and tapping to the audiences most primal fears of what happens when you turn off the lights.

“It would be a cliché to say that, because I am a Mexican, I see death in a certain way. But I have seen more than my share of corpses, certainly more than the average First World guy. I worked for months next to a morgue that I had to go through to get to work. I’ve seen people being shot; I’ve had guns put to my head; I’ve seen people burnt alive, stabbed, decapitated … because Mexico is still a very violent place. So I do think that some of that element in my films comes from a Mexican sensibility.”

Though many of del Toro’s films weave dark tales, his use of colour brings a vibrancy to proceedings, often working with his longterm collaborator, director of photography Guillermo Navarro, to add visual depth to his films, letting the image tell the story as much as the dialogue in any given scene.

Over the years del Toro has intertwined his more personal Spanish-language films with larger scale Hollywood movies. He has struck the proverbial gold mine on a number of occasions with his more intimate stories, however his break into Hollywood filmmaking was not an initial success, and perhaps shaped his approach to projects he took on later in his career.

“I remember the worst experience of my life, even above the kidnapping of my father, was shooting Mimic. Because what was happening to me and the movie was far more illogical than kidnapping, which is brutal, but at least there are rules. Now when I look at Mimic, what I see is the pain of a deeply flawed creature that could have been so beautiful.”

Guillermo del Toro’s first foray into Hollywood film making was not a happy affair, with studio interference damaging his take on the story he intended to tell, as well as how he intended to tell it. Reportedly demands were made for changes to the script midway through shooting the movie, perhaps accounting for the formulaic and underwhelming resulting piece.

Though we see glimpses of del Toro’s imaginative creature creation, Mimic is a largely forgettable and lacks the depth we would later become accustomed to expect from a del Toro movie. Guillermo del Toro himself would later come to publicly disown Mimic, though he did eventually revisit the film for a Director’s Cut DVD release.

“I’m a huge comic book fan. It’s tough to do a bad comic book movie. So many people don’t understand that comic books are one of the most sophisticated forms of entertainment. There are some comic books that rank up with the greatest works of humanity for me.”

Blade II was both del Toro’s second crack of the whip at both making a film in Hollywood, and his second vampire movie. It was also his first involvement in a sequel, shifting the tone of Stephen Norrington’s Blade, upping both the humour and action quota in comparison to the first entry into the series.

The film was solid if unspectacular, and del Toro turned down the opportunity to later work on the third instalment of the trilogy in favour focussing on Hellboy.

“I’ve been obsessed with vampires all my life. I’ve never been satisfied with the romantic conception of the vampire, so I was fully conscious, trying to reformulate that myth from a completely new perspective, which is alchemy and addiction and Mexican melodrama all together.”

As his first feature length film, Cronos was to be the World’s introduction to Guillermo del Toro. And quite the introduction it was. An early of example of his passion for horror, and intricate design, Cronos tells the tale of an ageing antiques dealer who stumbles upon a device which grants the user eternal life, at a dear cost.

“What makes a man a man? A friend of mine once wondered. Is it his origins? The way he comes to life? I don’t think so. It’s the choices he makes. Not how he starts things, but how he decides to end them.”

Ron Perlman’s casting as Hellboy’s titular character proved to be a stroke of genius, bringing heart to del Toro’s adaptation of Mike Mignola’s comic series. It was the actor and director’s third collaboration, with Perlman proving with style that he is leading man material.

Sandwiched in between The Devil’s Backbone and Pan’s Labyrinth, Hellboy marked the midpoint of what was probably the most prolific period of del Toro’s filmmaking career thus far in terms of quality, and more than holds its alongside these two giants of his filmography.

“A movie like this, it’s easy to forget how unique you can make it. I wanted to make the movie not a war movie but an adventure movie — a movie that has a huge, romantic sense of adventure, grandeur, operatic battles that were not only respectable but have a huge emotional content. Because in a movie like this when you have 25-story monsters and you don’t have a sense of awe and scale, everything is lost.”

When Guillermo del Toro announced that he was making a monster movie, it was clear that his take on the genre would be massive in scale and beautifully designed.

Drenched in neon colours, with gigantic Kaiju vs Jaeger battles Pacific Rim is hugely fun, if not del Toro’s deepest movie. Nevertheless, it acts as del Toro’s love letter to the genre, and in his hands it is a lot more fun than it has any right to be.

“Well, the first thing is that I love monsters, I identify with monsters.”

The second time around, del Toro’s trip into the world of Hellboy brought a significant increase in the more fantastic elements of the universe, as well as a beautiful colour palette, and incredible practical effects.

Hellboy II improved on almost every aspect of the original film, and expanded the scale significantly, featuring an excellent villain in Prince Nuada, an awe inspiring Troll Market sequence which harks back to the Star Wars Cantina scene and lot and lots of monsters. Hellboy II was an amalgamation of what del Toro does best – stunning visuals and beautiful monsters, with a lot of heart and a large serving of humour.

“To me it’s not a ghost story, but a story with a ghost.”

During the final throws of the Spanish Civil War, young orphan Carlos is taken in at a small orphanage, and soon begins to encounter the ghost of another small child named Santi who disappeared from the orphanage previously.

Rather than relying on cheap jumps and scares, del Toro finds unease in slowly playing with the audiences expectations, and layering on the tension as the Santi haunts the lonely and lost inhabitants of the orphanage, making this a modern horror classic.

“These shots are not eye-candy, they are, to me, eye-protein.”

Beautiful, mesmerising and heartbreaking, Pan’s Labyrinth is del Toro’s masterpiece. Set against the backdrop of the Spanish Civil War (as with The Devil’s Backbone), Pan’s Labyrinth tells the tale of a young girl’s journey into a fantasy world.

Throughout the duration of the film it’s unclear as to what we are seeing is reality or Ofelia’s imagination as she blocks out the cruel truth of the world surrounding her. She encounters the devious and terrifying Pan, the horrific Pale Man, who takes inspiration from Goya’s painting Saturn Devouring his Son, as well as her new stepfather Vidal, who is ultimately the most dangerous character she will face.

Pan’s Labyrinth cinematographer Guillermo Navarro picked up an Oscar for his work on the film and this is reflected in the beautiful use of colour, light, framing and camera movement throughout the film, with each aspect marrying perfectly to create a visually stunning treat.

Yet there is so much more to Pan’s Labyrinth than it’s visuals, and it will go down in history as a modern classic, and the ultimate tragic fairy tale.

Have your say on your favourite del Toro movies in the comments below.

You can keep up to date on all things Guillermo del Toro on his official fan site, and of course here at Flicks and Pieces.